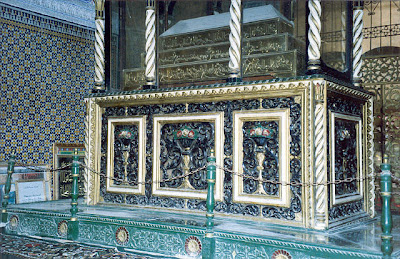 “Visit this sacred tomb and pray at its mihrab”


“Thereat the deeds of doers, the more so, acceptable”


“And remember, therein, thy Lord, read His Book”


“And abide with what has been ordained by Him”


“And recite prayers upon the Prophet, and”


“Upon his noble family and his Companions”


“And make thy intermediary the one, whose nobility”


“Makes this tomb, excel over the rest”


“The Tijani, Ahmed the Magnate of guidance”


“The ocean of generosity & kindness to his visitors”


“By his rank & prestige ask thy Lord, thee wilt be granted”


“For thou art at the gate of His grace & favor”


"And make thy everlasting retreat"

What is the Tariqah Tijaniyya?

What is the Tariqah Tijaniyya?

The Tariqah Tijaniyya is one of the major Tariqahs in the world; however it is unknown to many, and thus remains a hidden gem. From the time of the Noble Prophet (peace be upon him), masters of the prophetic spiritual science have established orders or tariqahs, which encapsulated their teachings and ways of ascent to the purification of the heart and divine knowledge of Allah (exalted is He).

Allah (exalted is He) says in His Glorious Qur’an:

“O ye who believe! Do your duties to Allah, seek the means of approach onto Him, and strive with might and main in His cause that ye may prosper.” 5:38.

Many Muslim are content to fulfill the rights of the Shari`ah and this is a blessed path, but throughout history some have sought to become closer to Allah (exalted is He), through spiritual exercises found in the Sunna. These exercises included Zikru Lah (remembrance of Allah), IstagfiruLah (seeking forgiveness from Allah), and Salat ala an-Nabi (sending prayers upon the Prophet). As for the first, Zikru Lah, Allah has said:

As for IstaghiruLah, Allah has said:

Additionally the Prophet (peace be upon him) is reported to have asked for forgiveness more than one hundred times a day. Finally, for the third, Salat ala an-Nabi, Allah has said:

“Allah and His angels send blessings on the Prophet: O ye that believe! Send ye blessings on him, and salute him with all respect.” (33:56)

Using these tools provided by the Sunna of the Prophet (peace be upon him) a Muslim is able to grasp the outward and inward aspects of the prophetic teaching, and insha Allah, purify his heart and reach closeness to Allah. Using these tools a Muslim can reach the status of Walliu Lah, or friend of Allah (exalted is He). Throughout the ages, the spiritual masters have reached this stage and then established the criteria for others to attain the same rank.

Shaikh Ahmed at-Tijani (may Allah be pleased with him) was one such master. In fact he was the Master of Masters. Born in 1739 in a small village in Algeria, the Shaikh devoted his childhood and adulthood to learning the divine Shari’ah, as well as the inward aspects of Islam. Through his diligence and piety he was given the gift of reaching two distinguished positions during the second half of his life. The first was al-Qutb al-Maktum, the Hidden Pole. In every era there is a pole, or a center from which all the Wallis on earth derive their inspiration. Shaikh Tijani was given this position. The Second was the Khatm al-Wilaya, the Seal of the Wallis. This did not mean that he was the last of the Wallis; rather it meant that no Walli after him would reach the height and grandeur of his status.

The Tariqah is based on the three tools mentioned above. Emphasis is placed on following the Shari’ah, meaning completing the daily Salat in a group, fasting in the month of Ramadan, making Hajj and paying Zakat, which are the pillars of Islam. Followers of Shaikh Tijani must persevere in daily Zikru Lah, Salat ala an-Nabi and IstagfiruLah. With Allahs grace using these tools the worshiper will achieve closeness to Allah. In a Hadith Qudsi Allah said, "I live in the thought of my servant as he thinks about Me, and I Am with him, as he remembers Me. If he remembers Me in his heart, I also remember him in My heart, and if he remembers Me in an assembly, I remember him in an assembly, better than his, and if he draws near Me by the span of a palm I draw near him by the span of an arm, and if he draws near to Me by the span of an arm I draw near him by the span of two arms. If he walks towards Me, I rush towards him". (Sahih Muslim).
Posted by ismail b. marchman at 3:11 PM 5 comments:

A Letter From Shaykh Tijani

A Letter From Shaykh Tijani
In the Name of Allah, the All-Merciful, the All Compassionate: blessings and peace be upon Allah's Messenger.

Let me counsel you to do what Allah has counseled you to do. He has said (Glory be to Him and Exalted is He):

"And We counseled those who received the Book before you, to practice true devotion to Allah". (4:131)

"And if someone practices true devotion to Allah, He will make his business easy for him and He will grant him a mighty reward." (65:4-5)

You should also know that the quest for true devotion (taqwa) has become a very difficult matter. It has become too far out of reach to be bridled and saddled by anyone, and aspirations have grown weary of pursuing it, so no one reaches its foundation and its confirmation, apart from the most extraordinary individual. That is because hearts and souls have become disposed to turn away from Allah and from His commandments, in every respect and regard, and they have sunk in the mire of material human concerns to a depth from which there is no hope of emancipation. This is the condition of the people of the era, in every region of every place on the face of the earth, apart from the most extraordinary individual whom Allah has rendered immune.

Because of what we have mentioned, the ocean of terrors and troubles has billowed, the ocean of misfortunes and trials has become thirsty and people have drowned in it completely, and it has come to the point where if the servant pleads for salvation and immunity from afflictions, afflictions will encircle him.

It has been said about this, “A time will come to the people when the oceans of trials and tribulations accumulate, so that nothing will avail them except supplications like the supplications of the person who is drowning.” The practice that will save you from what we have mentioned, however, and that will extinguish most of its fires, is frequent repetition of the plea for forgiveness, the invocation of blessings upon the Prophet (Allah bless him and give him peace), and the remembrance that there is no god but Allah Alone!

La ilaha illa llahu mujarrad.
--the remembrance:
There is no god but You, Glory be to You
I have been among the evil doers
(La Illaha illa Anta, Subhanika inni Kuntu
Minal Zalimeen.)
--the declaration
Allah is sufficient for us, and Most Excellent
as the Custodian! (3:173
(Hasbunallahu wa Ni ma Wakil)

Nevertheless each one of you will derive benefit from these remembrances according to his capability. You must also make a frequent practice of humble entreaty and supplication to the One who possesses the perfection of Might and Majesty, for Allah is All Compassionate, Ever Loving in relation to His servants. If He is humbly implored by a humble supplication, by one who is encompassed by misfortunes and sorrows, and who stretches his hands towards Him, beseeching His favor and hoping for His generosity and His benefaction, He is too nobly generous and too tremendously Gracious to send him away disappointed, or to deprive him of His mercy.

Incompetent indeed is someone who is incapable even of humble entreaty and supplication, and as for someone who deprives himself of Allah, (Exalted is He) he has no bone-setter to mend him.

You must therefore pay visits to Allah's door, through the passage of the hours and the succession of the moments, for if someone makes a habit of that in the succession of his moments, he will be covered, by the mercy of Allah and His fragrant perfumes with that which annihilates his afflictions and his worries, and eases the weight of the burdens heaped upon him by his misfortunes, because Allah is Infinitely Rich and Nobly Generous, and on account of His Generosity, if He sees that a servant has made a habit of standing at His door, even for just a few moments, He cannot bear to abandon him to the misfortunes from which he has no way out.

You must keep this promise, and race in this arena, even for the very smallest fraction of the passage of the day and the night, in order to find facilitation in all matters and deliverance from many evils.